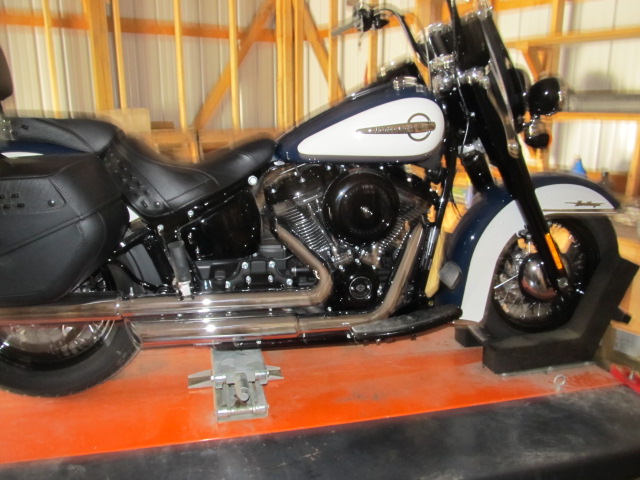 Mark BELL
Last Sunday afternoon was the first nice sunny afternoon in a long while, so, I took my new Sportster out for it's first ride. Got about 2 miles from home, then a clanking noise in the motor caused me to turn around and head back. Didn't make it. Engine locked up. Well, my spirits sank to a new low. Imagine a brand new bike, getting only 2 miles before something lets go. Now, I feared the warranty arguments would begin.. Phoned some local help to arrive, and assist getting the Sportster loaded onto my trailer for the trip back to Loess Hills on Monday. Now Monday comes, and I arrive at Loess Hills and Glenn met me first, and soon the whole gang was gathered around to see what happened. I pushed the Sportster inside, and Glen tried the starter with immediate clanking sounds emerging from the engine. He said they would tear it down and find out what happened, but in the mean time not to worry as it would be full warranty. Glen went on to explain since my case was so unusual, he would get me a new bike identical to this Sportster if I wished, or for extra boot money added to what I paid for the bike, I could upgrade to a bigger one on the show room floor. Since I am a bit superstitious, I opted to dig deep and move on to an upgrade. Now Ryan steps in and he knows exactly what I need to upgrade. We went up the showroom floor to a left over '19 Heritage Softail they had accessorized. Talk about a beauty! She had everything. As Ryan went over all the switches and functions, I could see this would be a nice bike to own. He loaned me a lid, Glen did the paperwork and DL copy and I was off for a test ride. Bike performed flawlessly, with the 107 Milwaukee 8, it had great acceleration. It was a heavier bike than the Sportster, but really, it was more to my liking. Now, we get down to brass tacks (dollars) to upgrade. Along with my credit from the Sportster purchase, my cash boot was just too high for me. I came up with a counter number and Ryan went to Dan Rolland with it. Dan came out of his office and together with Ryan came over to where I was seated and begin to visit. I like Dan..He is easy to visit with.. We talked farming, he had questions on planting dates etc, and I did my best to answer his questions..Finally we got to price. He wrote down on a piece of paper what he could do..I bumped up my cash boot a good amount, but not quite high enough. He left a final figure with Ryan and I went home to consider it all. I asked them to consider my offer also. Next Morning Dan had left, but Dan Breesman came out to see what was happening. We talked a bit, but He could do no more and Ryan said it was up to me. I took the leap! I liked that color on the Heritage. So, that is how the deal went down. Yes, Perhaps I should have stayed with the Sportster and forgot about my superstitions,,,but,,,That is not me. I really have nothing bad to say about the Sportster, I never got a chance to ride it and find out all it's weaknesses and plusses...But, It bit me, and with a chance to move up while holding my money together on the deal was too much to pass up. Now I am a happy Heritage Softail owner. If you want a great dealer who takes care of you if something happens to your purchase, I can think of no better than Loess Hills Harley-Davidson. See Ryan, he did good for me. (Employee: Dan Roland, Dan Bressman, Glen McCoy, Bill Fisher) 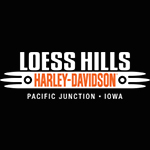 James Crist
One of the best dealerships you'll find

Jenn Brammer
Jessika is absolutely amazing. She is always very helpful, patient and attentive. She's the reason I enjoy going there, well and I'm addicted to the products. (Employee: Jessika Fisher)

James Corbett
Thanks so much to everyone at loess hills harley. You have a great staff .from sales and gear .always nice and helpful. Look forward to doing more business with you..thanks for all the help..much appreciated. Ride on..

MARK BELL
Stopped in on an unusually nice Saturday in February to eat some free jumbulya and see what accessories I could pick up for my new-last year's FLHTP purchase. Noticed a new '19 left over Sportster Iron 1200 sitting there that I had seen before. Had a real cool paint job which reminded me of the way they used to paint bikes back in the AMF days. I threw a leg over and sat looking it over. Pretty soon a new salesman named Ryan came over and started a conversation with me and the Sportster. He said he was new, but had worked selling Harleys before.. He was very knowledgeable of the product's features and controls, options, and just a real nice, easy, no pressure guy to visit with. We got around to price, and he was just too high for my budget and I told him so..He was insistent on me giving him a number that he could work with. Finally, I said I would have to come back someday and ride it before giving out my number. He said fine, look me up when you are ready! I left. Monday he calls me up and said to come on over for a ride. I had some things to get done, but said I would be by later. Next day I dropped by and found Ryan, he did the paperwork, copied my DL, gave me the keys, opened the front door and out I went. Cold day, but I still was able to do a pretty good check ride. Returned, parked, and went inside with my number to give to Ryan. (I would advise any new purchaser to be positively sure of a number you give out, as that is what they go to work on) After Ryan's consultations with Glen, Ryan said it was too light for what they wanted, and with all the options I desired added, there was just not any room. Perhaps he could show me some late model used Sportsters? Well, no thank you, I wanted new and could see there was just no way, but I had a Triumph I had not ridden since I bought the new FLHTP last year, so asked Ryan if they could do it if I threw that in with the cash boot on the deal...This time he had to get Dan Roland involved as the deal was getting pretty thin, but very close. Dan remembered me from the last bike deal, and we had a good visit, laughed about the coin toss, good memories. I like Dan, he is a numbers guy, and I understand numbers! Well, he shot me a counter offer not knowing how my Triumph would sell on the used market. I explained it was extremely low miles, never down, and a rare bike for sure would sell well. He became stuck on his number. He said he just couldn't lose money. OK, I said, but since I am a farmer, there are many times I have lost money in order to make it up later in extra production or efficiency in my business, and it might pay off in the long term for him doing this deal. I started gathering my things, thanking Ryan and Dan for their work, but I was done and leaving....Dan stopped me, looked at my number and his number again, said He would go ahead.! And that is how I got the new, left over '19 Sporty with the AMF paint job bought. Now for the options, the windshield was a 30 day back-order from HD...So, that was a little disappointment, but Casey did his best to get done and delivered here, and when it came, it was in pristine condition. I had to get some saddle bags from Jeff, but he had them in stock, so great! Got em w/o ordering. Now I am set. Bring on sunny days! I would recommend anyone wishing to purchase a HD, to give Ryan a shot. He is pretty darn good and will work your deal clear up the ladder to get you a bike. Thanks Loess Hills. Good guys again to do business with. Always enjoy dealing there. (Employee: Dan Roland, Casey Walker, Jeff Brown, Glen McCoy, Bill Fisher)

Danny White
my wife and I stopped in last week,(mar. 14) while on a trip to Omaha, shopped for some new summer wear and all the staff we encountered were very helpful and a joy to work with. was rang out by new girl, I believe cassie h. was her name. for being so new she was very knowledgable and made us feel welcome and at home. I couldn't find her pic in the team member section, perhaps since so new. should rectify that as she is a valuable asset to your group. will definitely be stopping in whenever in the area.

Eileen Tant
I love the atmosphere there. Friendly staff and easy shopping. I've bought most all my riding gear there. I did try to learn to ride my own bike but was told the 500 is to heavy for me so I guess I'm just a passenger, but it's better than not riding at all. I have not been back in since the flooding and have no riding partner now so just keep up doing what you do so well. Your a great place to shop. (Employee: Jessika Fisher)

jon parsons
Casey has always treated me fairly and answered all my questions, has returned phone calls to me. He's very knowledgeable about parts and repairs. He generally has all the info. about the latest updates concerning motors and bikes in general along with new products/parts. The parts dept. is always willing to help out and sales people are friendly and there to greet you when you come thru the door. Great events and entertainment at this dealership. Thanks, rise above and ride on!! (Employee: Casey Walker)

Bradford Colvin
to all and to the people who have left over the years,for all you do to make me and my wife Tonie feel welcome and part of a bigger family every time we stop in. Looking forward to many more times of fun, see you soon (Employee: Jessika Fisher, Amanda Placek, Bobby Clark, Bill Fisher)

Kelly Hastings
I just have to say that Loess Hills Harley Davidson is hands down the BEST DEALERSHIP AROUND! On Saturday Dan, Gary, Amanda and Glen made it happen again! I purchased my dream bike for the third time! I have never had a bad experience at this dealership. So if you are in the market for a new bike ask for Gary or Amanda. If youre looking for parts or accessories ask for Casey or Jeff. If its service Crane is the man and dont forget my favorite in motor cloths Jessika! You just cant go wrong here. Never will I ever buy from another dealership.
,